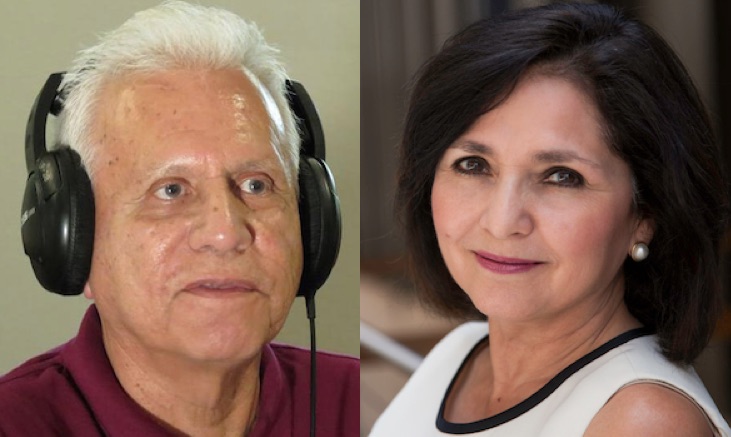 They discuss with host Thorne Dreyer the important role played by Latinos and Latinas in history -- and how their accomplishments are often ignored or given short shrift. In 2007, Latinos (and others) throughout the country protested Ken Burns' 14½-hour documentary on World War II, The War, that included no Latino voices. A grassroots group emerged that forced PBS's hand with an intense letter-writing campaign, petitions, protests, and meetings – and, as a result, Burns filmed and added interviews with two Latin-Americans and one Native American to the series. Defend the Honor, co-chaired by Dr. Rivas-Rodriguez, is the grassroots organization that developed from that 2007 effort.

Voces Oral History Project, created by Maggie Rivas-Rodriguez held a community discussion -- called "Defend the Honor: 10 Years Later" Saturday, Oct. 28, 2017, at the Emma S. Barrientos Mexican American Cultural Center in Austin. Questions addressed include: What was gained? What was lost? and What has changed? Rivas-Rodriquez and Gregg Barrios both spoke at the event.

Maggie Rivas-Rodriguez is a professor of journalism at the University of Texas at Austin, as well as the founder and director of the multi-faceted Voces Oral History Project. The project has recorded interviews across the country with over 900 Latinos/as of the WWII, Korean War, and Vietnam War generations. The project has produced four books, provided the bases for three plays, developed educational materials, created photo exhibits, and become a resource for scholars and others looking for photographs and interviews with Latinos of the three periods.

Before earning her Ph.D. from the University of North Carolina at Chapel Hill, Rivas-Rodriguez worked for more than 17 years in major market news outlets, including the Boston Globe, United Press International, WFAA-TV in Dallas, and the Dallas Morning News. Rivas-Rodriguez also has a masters from Columbia University's Graduate School of Journalism. Her bachelor of journalism degree is from the University of Texas at Austin.

Gregg Barrios, a San Antonio-based poet, playwright, filmmaker, and critic, and former book editor of the San Antonio Express-News, serves on the board of directors of the National Book Critics Circle and was recently elected to the prestigious Texas Institute of Letters. Gregg moderated a panel, "The Many Faces of Texas Poetry," at the 2015 Texas Book Festival. Barrios was a 2013 USC Annenberg Getty Fellow and has been awarded a CTG-Mark Taper Fellowship, a Ford Foundation Grant, and a 2013 Artist Foundation Grant for his theater work. A Chicano activist in the '60s, Gregg Barrios was an original contributor to Austin's underground newspaper, The Rag, and has been our guest on Rag Radio four times previously. Rag Radio is produced in the studios of KOOP 91.7-FM, an all-volunteer, cooperatively-run, solar-powered community radio station in Austin, Texas, in association with The Rag Blog and the New Journalism Project, a Texas 501(c)(3) nonprofit. The host and producer of Rag Radio, Thorne Dreyer, is a prominent Austin-based activist and writer who was a pioneer of the ’60s underground press movement. The show’s engineer and co-producer is Tracey Schulz and the staff photographer is Roger Baker. The syndicated show is broadcast (andstreamed) live Fridays, 2-3 p.m. (Central) on KOOP, and is later rebroadcast and streamed on WFTE-FM in Mt. Cobb and Scranton, PA., on Houston Pacifica's KPFT HD-3 90.1, and by KKRN, 88.5-FM in Round Mountain, CA -- and as a featured podcast at Veterans Today.